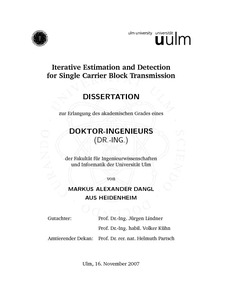 This thesis deals with efficient receiver design for digital point-to-point communications. A single carrier block transmission scheme, including channel coding, shall serve as a basis. At the receiver neither knowledge of the channel impulse response (CIR) nor the signal-to-noise ratio (SNR) is assumed. Accordingly, those parameters have to be estimated for power-efficient data detection. In particular, an iterative solution for joint parameter estimation and data detection based on the turbo principle is investigated. As a result of an in-depth study of various decision-directed SNR estimation techniques, a novel estimator using a priori probabilities of data symbols is derived for Gaussian channels with binary modulation. The potential of the algorithm is evaluated for the example of iterative decoding of concatenated convolutional codes. In the case of multipath channels, the CIR has to be estimated, too and equalization is additionally necessary. Iterative equalization and decoding is chosen as a powerful technique for data detection with moderate computational complexity. A decision-directed channel estimator based on the least-mean-square algorithm is suggested that adapts its step size according to the quality of the data estimates and that does not require SNR knowledge. Numerical results for a turbo equalization setup support that the proposed channel estimator performs well for arbitrary signal constellations. Furthermore, the performance of turbo equalization itself is addressed. An optimization algorithm for bit-to-symbol mappings is presented that enhances power efficiency by means of iterative demapping. The algorithm can be applied to any equalization technique if the equalizer"s output variance is known or can be estimated. Finally, the use of estimation error statistics is investigated. Its advantage for turbo equalization and the relationship to decision-directed channel estimation is shown by an extrinsic information transfer analysis.