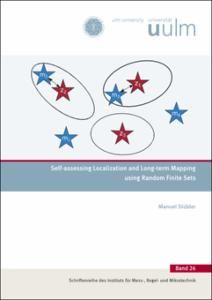 Localization is the task of estimating the pose of a vehicle. In the present thesis, this is done using a feature-based map of the environment and different kinds of sensors that are able to detect those environmental features or landmarks. After introducing the notation and mathematical foundation, the random-set Monte-Carlo Localization (MCL) is derived. Landmarks from a map and their respective measurements are modeled as Random Finite Sets (RFSs) with an unknown association between each other. This concept evolved in literature over the past years and is continued in the present work. The main difference of random-set MCL compared to vector-based MCL is the calculation of the likelihood between map landmarks and sensor measurements. By incorporating the multi-object likelihood, which is known from RFS-based tracking algorithms, not only missed detections but also clutter measurements are considered in a mathematically rigorous manner. Hence, random-set MCL is a very robust localization approach as also shown in the evaluation using challenging real-world scenarios. Several assumptions of the multi-object measurement model are typically made: the spatial distribution of landmark measurements is Gaussian, the detection probability follows a Bernoulli distribution, clutter is distributed uniformly in the Field of View (FOV) and its rate follows a Poisson distribution. Those assumptions are also very common for multi-object tracking algorithms that are based on RFSs. However, they have to be validated in order to provide a reliable localization result where not only the position but also its uncertainty estimate is of relevance. Hence, this thesis introduces a new methodology to online estimate and validate the multi-object measurement model. A deviation between assumed and estimated parameters is detected in a stochastic manner by using confidence intervals. By utilizing this redundant information, it is possible to online validate the localization result even without having a reference system. Knowing about the reliability and consistency of a localization estimate is a huge benefit especially for highly automated driving. The localization of a vehicle in a dynamic environment does not only require a theoretic foundation but also a practical implementation. Consequently, methods to extract meaningful landmarks from cameras, laser scanners and radar sensors are also part of this thesis. The extraction process especially focuses on landmarks that are part of the infrastructure and are therefore quite stable over a long time span. In order to localize a vehicle, a map of the environment is necessary. Thus, the second part of this thesis focuses on random-set mapping. First, state-of-the-art techniques are introduced, including RFS-based Simultaneous Localization and Mapping (SLAM) algorithms. Next, a new concept for the feature-based long-term mapping is derived which is able to fuse chronologically ordered transient short-term maps by making use of the Markov assumption. However, at some point in time a map will be outdated. Therefore, the concept of long-term mapping is extended to a continuous mapping approach. The idea is to keep a feature map up-to-date by continuously fusing new information from different vehicles into a common long-term map. Each vehicle thus performs an RFS-based online SLAM by additionally incorporating a probably outdated or sparse map as a prior information. This prior helps circumvent the inevitable error propagation of SLAM. An evaluation of the localization, its consistency as well as the long-term and continuous mapping is provided using real-world data from two test vehicles in challenging scenarios. Those test vehicles were set up at the Institute of Measurement, Control and Microtechnology at Ulm University. They are able to automatically drive in an urban and rural environment by localizing itself using the presented algorithms.