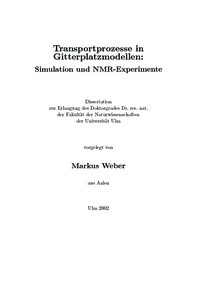 Stationary thermal convection was investigated in two-dimensional 100 x 50 site percolation models with the aid of numerical simulations based on the finite volume method (FVM). For the Rayleigh-Bénard configuration in the non-disturbed pore space a critical Rayleigh number exists below which only heat from incoherent motion can be transported. A local investigation of porous systems shows that with different heat conductivities between the matrix and the liquid coherent motion exists even below the critical Rayleigh number. These numerical investigations have been extended to real systems. Thus, with NMR velocity imaging stationary thermal convection on quasi two-dimensional site percolation models could be investigated. Direct comparison with numerical simulation led to good agreement not only for flow pathways but also for the velocity distribution functions. Apart from velocity maps temperature maps could help to characterize thermal convection. The spatial temperature distribution of thermal convection in a two-dimensional site percolation model has been measured. The temperature map compares well with the corresponding velocity map. Besides the hydrodynamic flow and the diffusion in porous media the investigation of transport of electric particles in percolation clusters is of major interest in percolation theory. With the aid of NMR current density imaging the spatial distribution of flow paths of electric currents in 60 x 60 two-dimensional site percolation model objects could be visualized for the first time. With this the experimental results could directly be compared to numerical simulations which are based on potential theory. The experiments and their corresponding simulations show a very good agreement in the current density maps as well as in the current density distribution functions. For comparing between electrical current and hydrodynamic transport, pressure-driven flow in the same porous structures was examined by using NMR velocity imaging.