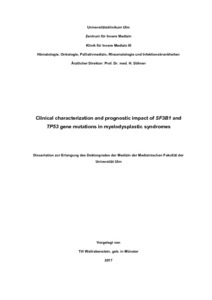 New sequencing techniques have led to significant progress in the molecular characterization of myelodysplastic syndromes (MDS) during the last years. This thesis project was started in 2012 to analyze genetic lesions in patients with MDS. A cohort of patients registered at the Ulm University Hospital was assembled and genetic analysis of two previously described target genes, TP53 and SF3B1, was performed. TP53 is known to be frequently mutated in all kinds of cancer, amongst others in myeloid diseases. In contrast, SF3B1 is a more recently discovered major target gene that has not been implicated in hematological diseases before 2011. Our aims were to investigate TP53 and SF3B1 mutations in terms of clinical associations and to determine their value as potential prognostic markers. Thus, we performed statistical analyses based on the generated data, searching for correlations between SF3B1/TP53 mutations and clinical characteristics. Genetic analyses were performed after isolation of deoxyribonucleic/ribonucleic acids (DNA/RNA) from bone marrow and peripheral blood cells. Polymerase chain reaction (PCR) assays were designed and optimized to amplify the target sequences of previously described hotspot regions for mutations. PCR products were screened for mutations by denaturing high-performance liquid chromatography (DHPLC) and subsequently analyzed by Sanger sequencing. Verification of single TP53 mutations required cloning of PCR products and manual isolation of specific PCR fragments from agarose gel. TP53 and SF3B1 mutations were discovered in 11 (9.5%) and 20 (17.2%) out of 116 patients with MDS, respectively. All SF3B1 mutations were point mutations, whereas 42% of all discovered TP53 mutations were deletions, insertions, or combined delins-mutations. One patient had two complex frameshift mutations of TP53 that were interpreted as result of aberrant splicing. TP53 mutations were significantly associated with an abnormal karyotype, peripheral blood blasts, lower thrombocytes, an unfavorable risk according to the international prognostic scoring system (IPSS), and shorter leukemia free/overall survival. SF3B1 mutations, on the other hand, presented with a more favorable clinical course of disease. Significant associations were ring sideroblasts, a high count of platelets and neutrophils, a certain set of MDS subtypes, and a high dependency on anemia related supportive therapy (transfusions and iron chelation). As a trend, SF3B1 mutated patients belonged in the two lowest IPSS risk categories. Albeit not statistically significant, SF3B1 and TP53 mutations were mutually exclusive in our study group. In summary, TP53 and SF3B1 mutations seem to characterize two distinct MDS entities. TP53 mutations present with a highly adverse and SF3B1 mutations with a rather benign clinical course of disease. Consequently, it can be recommended to include mutation analysis of these two genes in the diagnostic workup and prognostic algorithms of MDS, as has recently been advised for some cases in the new WHO classification of MDS (2016). There remains the question, whether therapeutic decisions should be adapted according to TP53/SF3B1 mutation status. Except for the entity of patients with MDS del5q, who have been shown to benefit from more aggressive therapy options if TP53 is mutated, no unequivocal answers can yet be given to this question. More recently, TP53 mutations are taken into consideration in the process of deciding for or against allogeneic stem cell transplantations. Randomized clinical trials of large patient cohorts in the setting of a standardized diagnostic workup of molecular markers have become the gold standard in clinical care and research about myeloid malignancies. Despite recent progress, research about MDS still seems to fall behind. This has to do with the absence of novel therapeutic agents, but also with the heterogeneity of MDS itself. Hope remains, that new therapies will be discovered and clearer guidelines for therapeutic decisions will be developed in the wake of recent progress in the molecular characterization of the disease.