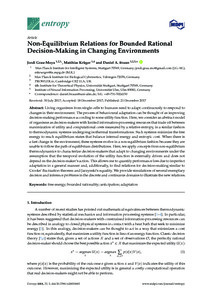 Living organisms from single cells to humans need to adapt continuously to respond to changes in their environment. The process of behavioural adaptation can be thought of as improving decision-making performance according to some utility function. Here, we consider an abstract model of organisms as decision-makers with limited information-processing resources that trade off between maximization of utility and computational costs measured by a relative entropy, in a similar fashion to thermodynamic systems undergoing isothermal transformations. Such systems minimize the free energy to reach equilibrium states that balance internal energy and entropic cost. When there is a fast change in the environment, these systems evolve in a non-equilibrium fashion because they are unable to follow the path of equilibrium distributions. Here, we apply concepts from non-equilibrium thermodynamics to characterize decision-makers that adapt to changing environments under the assumption that the temporal evolution of the utility function is externally driven and does not depend on the decision-maker's action. This allows one to quantify performance loss due to imperfect adaptation in a general manner and, additionally, to find relations for decision-making similar to Crooks' fluctuation theorem and Jarzynski's equality. We provide simulations of several exemplary decision and inference problems in the discrete and continuous domains to illustrate the new relations.