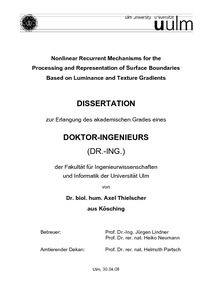 The human visual system uses a variety of features, such as color, motion, depth and texture, to automatically group together visual items constituting an object and to segregate them from items belonging to other objects in the visual scene. Here, I focus on human texture and depth processing, respectively, and investigate the underlying neural substrates using two neural models that share common basic processing principles. The model of texture processing consists of a hierarchy of bi-directionally linked model areas. It builds upon two key hypotheses, namely that (i) texture segregation is based on boundary detection - rather than clustering of homogeneous items - and (ii) texture boundaries are detected mainly on the basis of a large scenic context that is analyzed by higher cortical areas within the ventral visual pathway. The model allows us to trace back fundamental psychophysical results on texture processing to their putative neural origins. Additionally, the functional role of feedback between cortical areas in the context of texture processing is identified, namely the suppression of ambiguous cell activities leading to a sharply localized detection of texture boundaries. The model of depth processing focuses on a specific monocular depth cue, namely T-junctions. At occlusions, T-junctions indicate the local relative depth precedence of surface patches. A globally consistent interpretation of the depth relations between the objects in the scene necessitates a mechanism that globally propagates such local and relative information. I present a framework in which local depth information is propagated along surface contours using local recurrent interactions between neighbouring neurons, resulting in a globally consistent depth sorting of overlapping surfaces. Unlike previous approaches in which locally restricted cell interactions could merely distinguish between figure and ground, the model also represents intermediate depth positions.