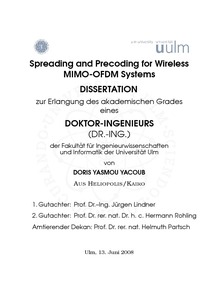 In recent years, multiple input multiple output (MIMO) systems have gained considerable attention due to their potential of achieving very high data rates and for providing a new diversity, spatial diversity, to the communication system. Multicarrier (MC) transmission schemes on the other hand are considered to be promising candidates for the fourth generation (4G) of mobile communications due to their efficient utilization of the available bandwidth. Orthogonal frequency division multiplexing (OFDM) is one of several MC variants and is a well-known technique used in broadcast media like European terrestrial digital television (DVB-T) and digital audio broadcasting (DAB) and in wireless local area networks (WLAN). Thus, MIMO-OFDM transmission schemes, offering both spatial and frequency diversities, have become an important area of research. The goal of this work is to introduce and present new methods that exploit both the frequency and spatial diversities as well as available channel state information at the transmitter (CSIT) in order to improve the system performance. This work deals with two cases where either no or partial channel knowledge is available at the transmitter. Assuming no CSIT, a transmission scheme known as spreading is employed. Criteria for choosing spreading matrices that achieve the full diversity of the MIMO-OFDM channel are given. Finally, a family of spreading matrices, Multi-Carrier Cyclic Antenna Frequency Spreading (MC-CAFS), satisfying those criteria is introduced. If partial channel knowledge is available, a transmission scheme known as precoding can be employed. The optimal direction for transmission and energy distribution are derived with the goal of minimizing the pairwise error probability. Finally, a theoretical overview of MIMO channel capacities is presented. In addition, the capacities of measured MIMO channels for an outdoor scenario with a strong line of sight are examined and compared to the theoretical ones.