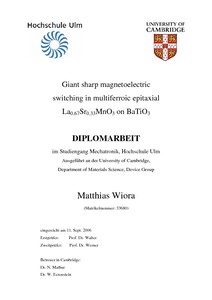 ***** Diese Diplomarbeit wurde im Jahr 2006 an der Hochschule Ulm im Studiengang Mechatronik verfasst und an der University of Cambridge im Department of Materials Science / Device Group ausgeführt. ***** Multiferroic materials, which are both ferromagnetic, ferroelectric and/or ferroelastic, have increasingly been studied over the past six years due to several promising advantages for applications. The application potential comes from the magnetoelectric (ME) effect, which means the magnetization can be controlled by an applied electric field or vice versa. This can be applied in e.g. data storage, field sensors and actuators. However, no single phase material has been discovered yet that is both ferromagnetic and ferroelectric at room temperature. Here I report on huge coupling effects in a multiferroic epitaxial heterostructure consisting ferromagnetic La0.66Sr0.33MnO3 film and ferroelectric (piezoelectric and ferroelastic) BaTiO3 substrate. Magnetic coupling due to induced strain at the phase transitions of the substrate were successfully investigated, showing large changes in magnetization as function of temperature. Upon that, novel ME measurements were performed inside a vibrating sample magnetometer. By applying a small electric field (4-10 kV/cm) across the entire structure, we achieved sharp and persistent changes in film magnetization of up to 65 % near the BaTiO3 structural phase transition at 200 K. This represents a giant magnetoelectric coupling (2.3 10^-7 s/m) that arises from strain fields due to electrically driven switching of ferroelastic non-180 degree domains in the BTO, whose presence we confirmed using x-ray diffraction. The hereby produced in-plane piezoelectric strain modifies the overlying ferromagnetic LSMO by switching its strain, resulting in a switching of the magnetic anisotropy of the film. The coupling persists over a wide range of temperatures including room temperature. These results deliver a vital contribution towards applications and understanding strain coupled ME effects.